Former President George Bush founded Zapata Company in 1953 as an oil company, but after the Bust in the 80's to stay afloat, exchanged oil for fish.

Menhaden (Pogy) fish are trash to other fishermen but gold to Omega Protein Plant in Moss Point, Mississippi.

I was invited to cast off on a 160 foot freighter with a crew of 12 at 3:30am (to give enough time to navigate the Escatawpa River and put us 30 miles off shore around sunrise.)

While most people on shore were having breakfast, our quiet morning was interrupted by a crackled message from one of the spotter planes overhead, "We got shad." This meant a school of menhaden had been spotted, and like firemen responding to the alarm, the crew jumped into slicker suits and rushed to their net boats.

Spotter pilots flying from Trent Lott Airport in Moss Point directed the mother craft to the find. The crew manned the 20 foot purse boats, so named as I soon found out on my first ride as we zoomed around in a merry-go-round to meet up with our twin, counter to our clockwise.

Just as I was recovering my bearings, it all ended in an abrupt halt as we tied on to each other like cowboys in a rodeo contest. As the waters settled, I could see the school had been netted like a purse with the underground nets being dragged in an 1,800 foot circle. Thousands of 8 inch silver captives flipped like circus performers in the gleaming water as the main freighter came to meet us with a 9 inch vacuum hose that sucked the catch (around 175,000) into refrigerated holds by way of a conveyor belt.

Every now and then a crew would spot a rock fish for supper and fling it on the deck, but no sport fish could be found by the SPORTS ILLUSTRATED writer who went along for a story (about sport fish caught) but came back empty.

This drill was repeated ten more times with a 15 minute stop for lunch. By days' end two living room sized holds were full of menhaden.

After unloading back at the plant that night for about four hours of sleep, they go back again.

Companies use menhaden for a variety of products from livestock feed, cosmetics and shortening and margarine. It is the only FDA approved source for omega 3 acids, for protection from heart attacks, cardiovascular disease and high blood pressure. 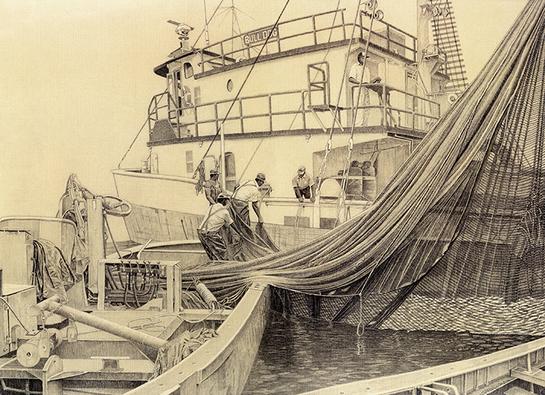