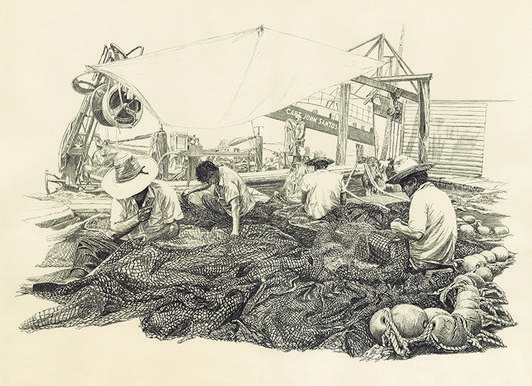 ​Joao Marcal has spent 20 years traveling back and forth from his home in Portugal to his job as a net maker here, seeing his children grow up in stop-action sequences of three month durations.

Marcal, 54 is one of 17 skill net makers who learned their trade as children in Portugal making sardine nets. They hired on with Joe Carinas to make menhaden nets for Gulf Coast fishers when Carinas couldn't find anyone in the country to do it.

All but three of the net makers spend nine months of the year in the US, then go home to their families in Portugal for three months.

"It's hard to leave your family for a year at a time, but many in Portugal are used to it. There are not too many jobs there." said Marcal

"Many  people  there would like to have my job."

Marcal speaks some English. Most of his fellow commuter do not.

There's a dog at our Patterson, LA place that doesn't understand anything but Portuguese," said Carinas, a descendant of Portuguese seafarers and a pioneer in the menhaden industry here.

He said a netmaker earns about $15,000 plus room and board during his nine months of the job here.

The net makers who work here live together in a sparsely furnished tin-sided house provided and provisioned by Carinas. They take turns cooking and there's a huge supply of antacid stored near the television in one room.

Carinas said he has tried for 30 years, without success to find American-born net makers.